The judge, Peter Hacker, Muckadilla, Queensland, gave the nod to the smaller ram, Kolindale 384, a home-bred sire who weighed around 160 kilograms.

“He is perfectly made with real good, soft, lustrous wool; he is big and square.”

Mr Hacker agreed, saying the 2-year-old winner was a big robust sheep with a magnificent fleece.

Kolindale’s reserve champion at Bendigo was a Poll Merino, who weighed a whopping 169kg.

The Ledwiths mate around 7000 stud and commercial ewes on their property at Dudinin in the WA Wheatbelt.

A NEW piece of history was created by the Ledwith family, Dudinin, in its Merino breeding journey at the Rabobank WA Sheep Expo & Sale at Katanning last week, when a Poll Merino ram from its Kolindale stud took home the show’s top award.

Among a shed full of highly productive and quality Merino and Poll Merino exhibits, the upstanding strong wool Poll sire, Kolindale 164, stood head and shoulders above the rest of the competition to claim the prestigious, purple supreme ribbon.

The win marked the first time the Ledwith family had won a supreme award in WA since purchasing the Kolindale stud from Colin and Rae Lewis in 2008.

Winning the supreme award also meant the ram became the WA Ram of the Year and earned the right to represent WA in the national judging this week in Dubbo, New South Wales.

However, with a number of field days still ahead of them and their two sales just around the corner, the Ledwiths decided they wouldn’t be making the trip across the Nullarbor.

The ram which was near big enough to saddle up and had wool cutting ability to go close to filling a bale itself, caught the eye of the judges early before going on to be sashed the supreme exhibit ahead of 236 entries from 30 studs.

After Kolindale 164 was announced the supreme exhibit judge Rod Kent, Kurrajong Park stud, Delungra, New South Wales, said it wasn’t an easy decision for the top award as all four sheep in the line-up were great examples of the Merino breed.

However in the end they couldn’t ignore the Kolindale sire as it stood up extremely well and was really hard to fault.

“The Kolindale ram is a great structured with phenomenal size,” Mr Kent said.

“He also has a quality strong wool fleece coming off a great skin and the quality of it runs right down underneath.

“In addition to all this he has a great sire’s outlook.

“He is a fantastic Poll ram and certainly one of the best Polls I have seen in a while.

“He is a really great sire and a credit to the breeders.”

Standing along with Kolindale 164 in the final line-up for the supreme ribbon were another three Poll Merinos – a well-balanced, young March shorn ram from the Mianelup stud, Gnowangerup, plus two upstanding ewes from the Coromandel stud, Gairdner, an August shorn and a March shorn.

Before being sashed the supreme exhibit, Kolindale 164, made it through the early judging to be sashed the grand champion August shorn ram.

Fellow judge Russell Jones, Darriwell stud, Trundle, NSW, said the Kolindale ram was a massive framed ram and it was its sheer scale that got it to the top of the line.

“His balance for such a large framed ram is tremendous while in terms of his wool it is also quite exceptional for his size,” Mr Jones said.

Kolindale 164’s run to the top started when it was sashed the champion August shorn strong wool Poll Merino ram in its opening class in front of five other sires.

Great results on our wool clip and a big thank you to everyone involved. 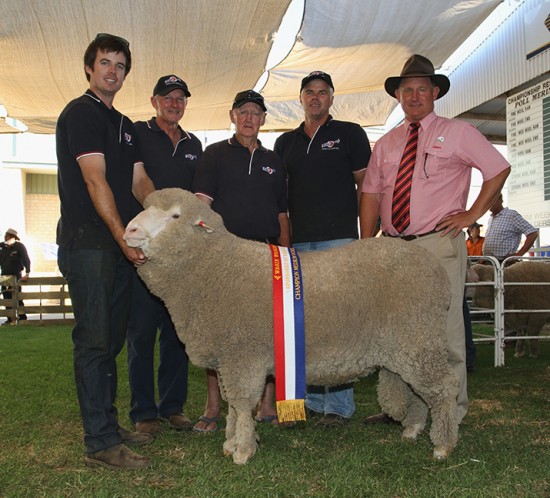 We are pleased with our win of Champion Medium Wool Poll at the 2016 Wagin Woolorama. Thank you to all of the Kolindale team for their efforts. 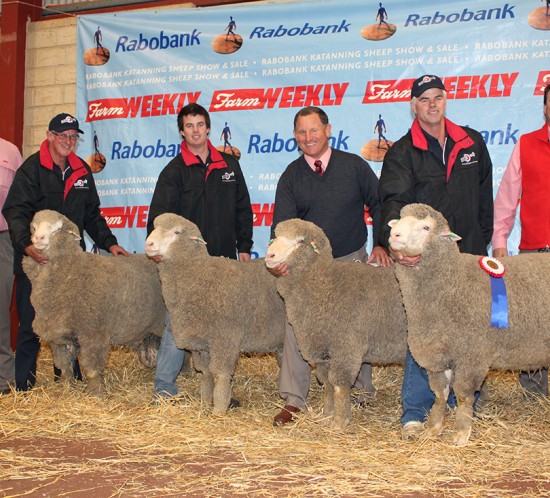 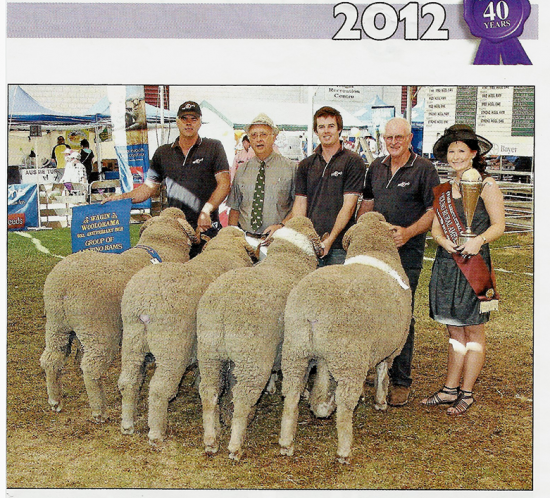 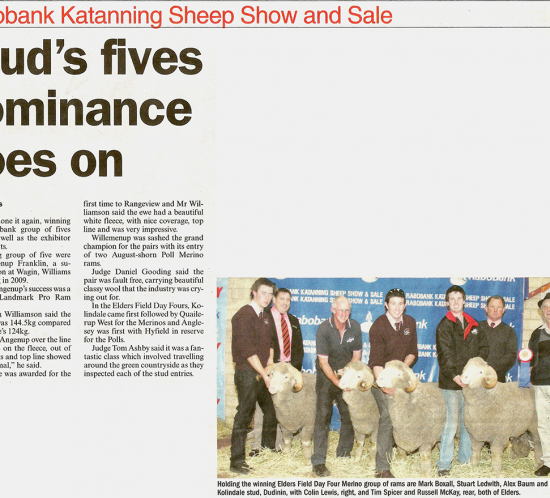 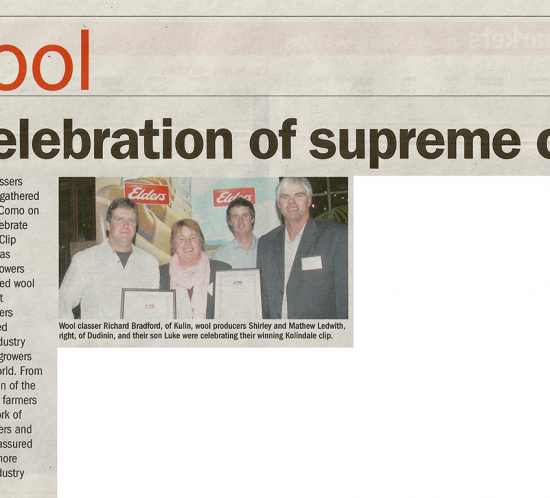 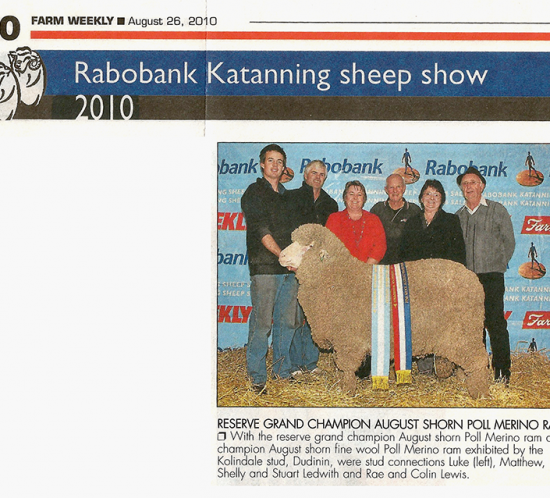 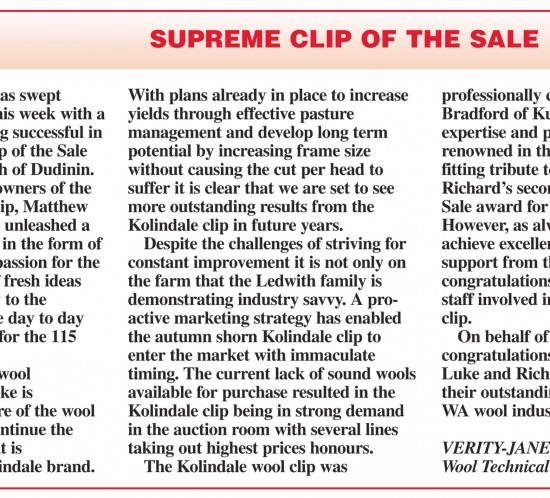 The Ledwith family’s Kolindale clip, Dudinin, was the winner of the supreme clip of the sale award for sale F31.